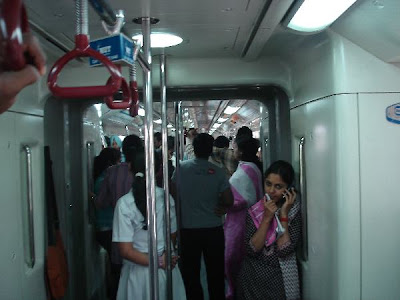 New Delhi without a traffic bottle neck in a forty-minute long drive was only a dream even couple of years before. My drive from the Chanakyapuri to East Patel Nagar and then back to the airport didn't see a single signal where we had to stop for more than few seconds. Flyovers and wider roads have done the magic. What is more effective though is the fabulous metro network.

Launched five years before, this new mode of transportation is a blessing for the citizens who were used to travelling in dilapidated buses and three wheelers that charge cut-throat prices! Initially launched to carry around 2 million passengers a day, the metro once completes all the four phases will be carrying close to 4 million passengers a day by 2012! 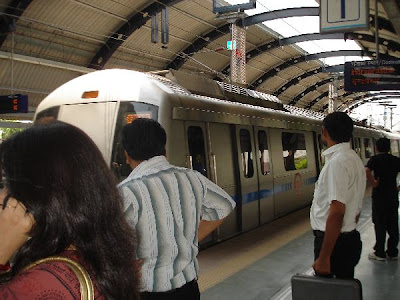 It seems by the launch of Delhi Metro, the savings is to the tune of Rs 40 lacs per day in terms of road maintenance and wear and tear! That's a hell lot of money for a poor country.(or even for the trillon dollar economy that we had just become last month!).

Consider the amount of pollution that comes out from badly maintained transport system otherwise?! Definitely an environment friendly option that makes economic sense as well to all the stake holders. It is also heralded as one of the few Metros in the world, that is making excellent profit as well. 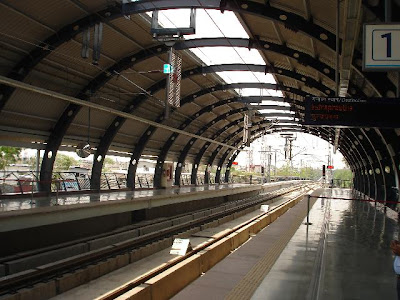 For any one who had travelled across the cities of India, this well maintained metro, its cleanliness, efficiency and the entire smooth functioning will be a culture shock. This is something that Indians can be really proud of! Even after the 5th year of launch, the system only seems to be getting better.

Now, Bangalore is going through a similiar process and I really wonder how efficient that would be. Considering the terrible infrastructure developments so far in Bangalore, the efficiency that is promised by "Namma Metro" is to be taken with a pinch of salt.

There was a time, whenever I get a chance that I used to move out of Delhi to places like Bangalore because of polution and congestion on the streets. After few days in Delhi in this trip (especially on the metro!), there were moments when I really thought of moving back to New Delhi from Bangalore.

Why not? May be work from Delhi considering the expansion plans The Blue Yonder has in Rajasthan and Eastern Himalayas?

Was supposed to be in Wayanad today for the Responsible Tourism workshop on destinations. Unfortunately fell ill and considering the phone calls, some people are wondering about the absence, considering that fact that we were so much part of the process initiation in Kerala! 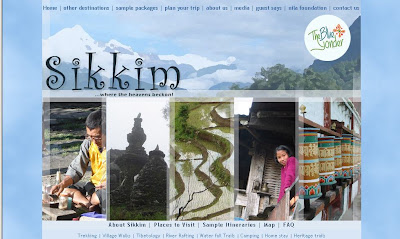 Well, it is becoming more and more difficult to even post a short message on the blog considering the working hours I am keeping again. One good thing that happened was that we managed to upload the site for Sikkim with a lot of support from Asha. Still awaiting comments from our regulars.

"For any destination that we operate, The Blue Yonder has its focus on our people, culture and wilderness. In a land that is so tiny but rich in its biodiversity and cultural heritage, Sikkim is blessed with people who are known for their hospitality and warmth. Like the fresh mountain air that you soak in on arrival, the evocative and sometimes mysterious ambiance of the surrounding would hook you on to the place in a way that you might never have experienced in a life time!

This is Sikkim. The land of mystic mountains! A mountain region that has touched the nerves of spirituality in its deep rooted Buddhist traditions; this is also where you meet graceful people with the penchant for legends and folklore. From "flying monks" to "wishing lakes", Sikkim is so inviting that you feel that you wouldn't want to go back. As if you are being invited into The Blue Yonder!"