River Nila featured as a destination in Footprint India handbook 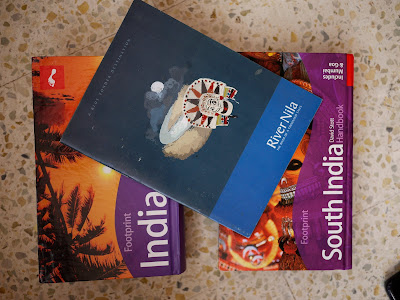 River Nila has been featured as a destination in Footprints handbook on India. The following is the part of the text that appears in the handbook.

"The blue thread of the River Nila, Kerala’s Ganges and the crucible of much of the state’s rich cultural heritage, stitches together a collection of fascinating sights and experiences in the rarely explored central belt of Kerala between Kochi and Kozhikode.

Along the River Nila

North of Thrissur the road and railway cut through lush countryside of paddy fields, quiet villages and craggy red hills mantled with coconut and rubber plantations, before crossing the wide sandy bed of the Bharatapuzha River at Shoranur. Known to the people who populate its banks as Nila (the Blue One), this is Kerala’s longest river, rising on the eastern side of the Palakkad Gap and winding lazily through 209 km to spill into the Arabian Sea at the bustling fishing port of Ponnani. Though its flow is severely depleted by irrigation dams and its bed gouged by sand miners, the importance of the river to Kerala’s cultural development is hard to overstate: ayurveda, kathakali and the martial art kalaripayattu were all nurtured along the banks of the Nila, not to mention the cacophonous classical music that soundtracks festive blow-outs like the Thrissur Pooram. Folk tradition too is vibrantly represented: elaborately-adorned devotees carry colourful effigies to temple festivals, snake worshippers roam house to house performing ancient rituals to seek blessing from the serpent gods, and village musicians sing songs of the paddy field mother goddess, passed down from generation to generation.

Despite all this, the Nila thus far remains refreshingly untouched by Kerala’s tourism boom, and few travellers see more of it than the glimpses afforded by the beautiful train ride between Shoranur and Kozhikode. This is in part because there’s little tourist infrastructure, few genuine “sights”, and no guaranteed way for an independent traveller to hook into the cultural scene. The traditional potters and brassmiths labour in humble workshops behind unmarked houses, and the performers – singers and dancers by night, coolies, plumbers and snack sellers by day – only get together for particular events. With your own transport you can search out any number of beautiful riverside temples, but without taking one of the superb storytelling tours run by local guides The Blue Yonder, the Kerala Kalamandalam might be your only direct contact with the Nila’s rich heritage."

You can purchase the book here:

Touching the chords of your inner life 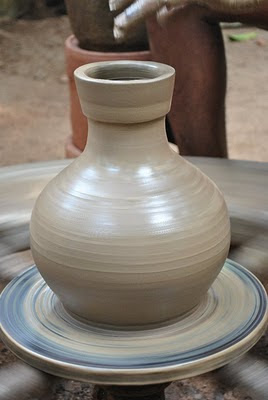 'Kumbhar' in Sanskrit means 'the one who creates'. You see 'Kumbhars' all over India. They create magic out of clay.They are potters of the country. Various reasons including droughts and the urge to travel led many 'Kumbhars' from Andhra Pradesh come and settle down on the banks of River Nila in Kerala several hundred years ago. Like many cultures that blessed the banks of this auspicious river, Kumbhars brought along their rich legends, folklore, skills, lifestyle, language and festivities to this river.

We take travellers from all backgrounds to interact with some of the few remaining potters' communities along the river. Travellers mostly leave exclaiming how magical the experience was! Some of them go into silence as if they are meditating, some of them request if they could try their hands on creating 'something' out of the clay. Once the wheel starts turning, and their hands feel the earth and water, many commented that they are touching the chords of their inner life. They are guided by the 'Kumbhars'- the creators.

The paradox of all this is how 'Kumbhars' are perceived in the Kerala society. 'Kushava' is how a potter is known in Malayalam and it's also used in our day to day life in quite a 'de-meaning' or derogatory way. As a kid, I remember being called a "Kushava" by relatives, when I used to do something really stupid. I am not a historian, nor do I have the knowledge to trace the history and perception of languages and colloquial usages. Wonder how such a beautiful word in Sankskrit meaning a creator, transformed into a derogatory 'Kushava' in Malayalam. Or at least the word 'Kushava' came to be understood.

What prompted to write this much is the news that one of the first potters that we engaged in the village of Arangottukkara stands a risk of not being able to use his hands as efficiently and skillfully as he could earlier. He had a stroke and left side of body including his arm and thumbs are finding it difficult to respond to his 'commands'. From a struggling potter to be someone who could earn a decent living out of local work orders and sustainable tourism initiatives, Gopalan potter has come a long way. However, the recent hospitalisation and lack of ability to work makes his future livelihood uncertain. The Blue Yonder along with it's partner Vayali Folklore Group in Arangottukkara within its constraints are supporting the artist by engaging him in running workshops where some of his relatives are guiding those wanting to learn the art and skill.

Rather than giving a donation or raise funds from well-wishers to support the artists, we are attempting to create an income generation for Gopalan and some other artists by providing them employment opportunities through sustainable tourism.

We are launching a series of 'skill based workshops' in River Nila to highlight the skills and creativity of artists like Gopalan. Please write /call us if you are interested.

Extra: One can also combine this as a weekend holiday that would include legend trails and folk expressions. Longer duration workshops are also possible.