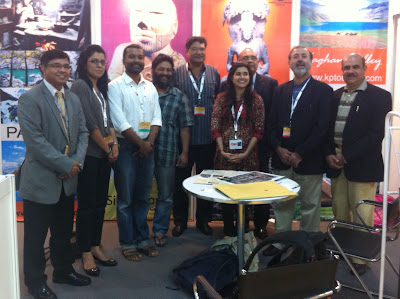 5th edition of ITB Asia, the premium travel trade show became a facilitator to support the initiative of Cross Border Tourism in South Asia under the leadership of "The Green Circuit". Playing a crucial role in facilitating the meeting between Tourism Stakeholders in Singapore, Hon. Minister for Tourism in Peshawar—Khyber Pakhtunkhwa region in Pakistan, Mr. Syed Aqil Shah, suggested that despite South Asia’s great tourism potential there is still much to do to reap the full benefits of cross border tourism.

'"Our coming to ITB-Asia today is a journey for "Friendship Tourism" focusing on South Asia. We would like to have  more meaningful travellers from South Asia visiting Pakistan. Considering the fact that three-fourth of the 130 million Outbound travellers from Asia is travelling Intra-Region, any decision to promote tourism between countries within South Asia has to be supported both in Private and Government levels."

"We are keen to provide support to "The Green Circuit" to facilitate Cross Border Tourism between India and Pakistan. Even though the oil well and such resources will deplete one day, possibilities of wealth creation through tourism will only increase. We believe that the future of Pakistan lies in Cross Border Tourism. There is no other better alternative to build better understanding between people and culture. Bhutan, Nepal, Sri Lanka, India Afghanistan and Bangladesh will benefit tremendously out of this initiative."

"As a first step, We would like to work with like-minded partners in India and Pakistan to bring together multiple stakeholders in tourism for a consultative engagement on Cross Border Tourism through a series of events in November in India followed by a consultation in December in Pakistan."

Raj Basu, Co-Founder of HELP Tourism said in the meeting, "In our individual capacities, we have been promoting cross border tourism between India, Nepal, Bhutan and Bangladesh for a while. It's time to scale this up and work towards promoting peace, bringing in more cultural exchange and livelihood options for the people in the region."

"Possibilities of Tourism as a key driver for peace and stability in the region is grossly under-estimated. Support from the Ministry of Tourism in Pakistan will hopefully influence many others in the region to take a positive stand to achieve equitable growth in the region and facilitate more meaningful 'People to People contact." said, Gopinath Parayil, founder of The Blue Yonder.

The Green Circuit is a network of five Tour Operators from India and Nepal (Social Tours, Ecosphere, Grass Routes, Help Tourism and The Blue Yonder) who believes that tourism can be used as a tool for sustainable development of destinations.
Posted by GP at 08:53 No comments: