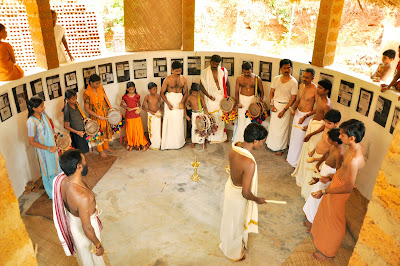 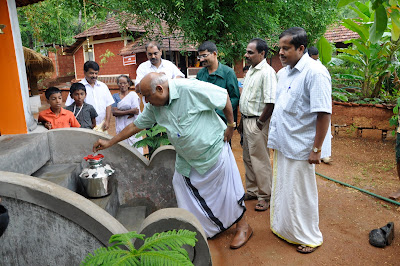 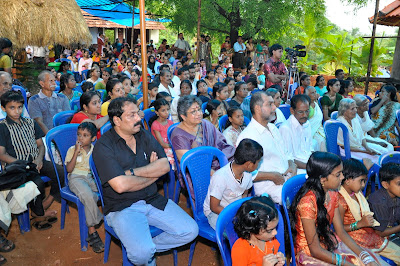 Crowd that gathered for the inauguration of the Kalashramam
This campus also has a small house in an obscure corner facing the hillock. This house belongs to Kalyanikutti Amma, a woman in her late 60s who helped Hari achieve his dream when the Government or the rich landlords in the region failed to do so. It was her generous donation of all her land to this cause that helped Hari build this unique memorial of art that is inspiring hundreds of youngsters today to keep traditional art forms alive. Hari didn't forget to renovate her old house within the campus for her comfortable stay.
In its own small way, The Blue Yonder worked in parallel to support Hari through bringing the attention of national and International media to his laudable initiative. David Stott, travel writer, photographer and editor of Foot Prints handbook for India inaugurated the campus, which got it a lot of well-deserved publicity. When James Newton of String Films, well known UK-based filmmaker visited the campus and saw public reaction to this initiative, he had only two words to describe it. "Mind boggling!"
'Njaralathu Kalasramam' (Kala = Art, Asramam = A learning campus), as the campus is called, is where The Blue Yonder organizes the musical trail for our travellers. In addition to experiencing musical styles of central Kerala, our travelers enjoy living in the beautiful campus as well. It gives us immense pleasure that we were part of the journey Hari started, a journey that proves that ordinary people can be the change makers, and accomplish extraordinary feats!
More on how Njaralathu Hari Govindan became part of The Blue Yonder in the upcoming blogs. Watch this space.
--
Posted By GP to One Tight Slap on 9/29/2010 06:20:00 PM
Posted by GP at 19:56 1 comment: