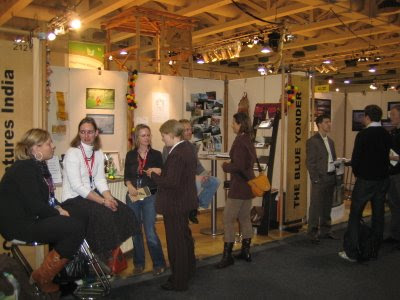 The Blue Yonder stand at Hall 4.1 / 211. This was the main networking point for many of our partners.

The Blue Yonder exhibited at the ITB Berlin 2009 in Hall 4.1 / stand 211 to show case our new holidays and share our new initiatives to the international audience. On invitation from the ITB, we also organised the first Responsible Tourism Networking event on the 13th at 1800, which was attended by about 150 people from different parts of the world. The event gave oppurtunity for many new comers to share their experiences in Responsible Tourism and network with like-minded people. About 25 pitches were raised including ours. 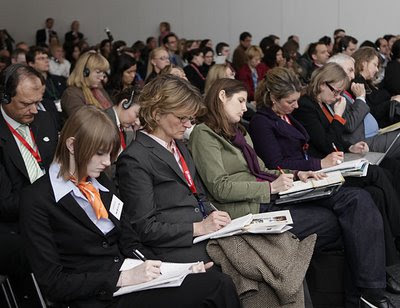 CSR was certainly a hot topic. All the sessions were full.
One of the important themes at the event however was the launch of Tour Operators of Peace in association with our partner Help Tourism to explore the oppurtunities of using Tourism as a tool for conflict management. We are currently discussing the possibility of organising a conference on peace through tourism with IIPT in India and shall keep you updated. 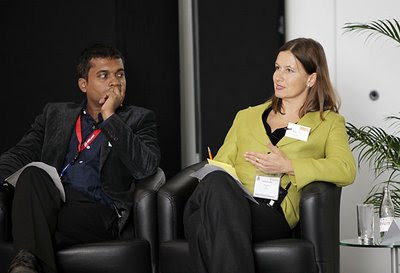 Gopinath Parayil (TBY) with Birgit Steck ( SNV) on 'CSR at work panel'
The Blue Yonder was also invited for panel discussions on CSR at work, which was attended by more than 300 people who filled in the Hall 7.1a (New York) showing the general interest in the topic. As in many conferences, we stressed the need to have social responsibility build into the business and not look at it as a fancy accessory that can be manipulated according to the market trends.

The Responsible Tourism Networking was co-sponsored by Eihab Travels and Traveltocare.com. We are also promoting a new website to bring together RT practioners on a common platform. Join the facebook group for networking.

The next RT networking event will be happening in Delhi on 24th April 2009. Watch this space for more details. More pictures from the get together in ITB-Berlin is here
Posted by GP at 02:14