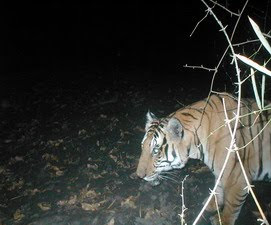 photo courtesey Dr. Andre Pittet CESD, IISC Bangalore
While the magic number of 1411 was getting plastered into the minds of the public in the country about the possible extinction of the most majestic of animals, the Government of India has issued an order to stop 'tiger tourism' in its parks. Will this save tigers?Or will it contribute further to the extinction rather quickly? While we debate on this decision being a bold one or another element of continued policy flaws, it is time that we start focusing on responsible tourism.

Community participation including patrolling has transformed at the least some of the poachers to focus on conservation. But ofcourse, these are people in the lowest ebb of chain, while others run the 'actual show'. Rather than thinking about making a quick buck illegally, such initiatives have brought in small but sustainable income to those communitieis who live on the fringes of forests in Periyar or places like Sunderbans. Responsible and sustainable tourism paved way to sustainable income to some extend.

So should we see this be seen as a temporary measure "till we clean up our acts" or is it all over for wildlife tourism?

Kevin Rushby wrote in The Guardian today on the ban on tiger tourism: "the decision unhappily, probably means that the tiger can now be exterminated in peace and quiet - directly by poachers and indirectly by illegal loggers". Responsibletravel.com called it as a "historic moment in eco-tourism". Really? "By banning tourism, the Government has effectively admitted its historic inability or unwillingness to properly manage Tiger tourism. " probably yes.

Once again we are thrown into the debate of efficacy of systems pursued. Will there be more stringent measures and criterias for properties and wildlife tour operators in the future if the parks are open again? Who will keep tab of what happens to the Tigers while the tourist are kept away. As Rushby writes, will "they be killed in peace and quiet?"
Posted by GP at 19:43

I think this is a dreadful decision

You only have to look at what carefully managed eco-tourism is doing for gorillas in Eastern Africa to see that tourism is often the only way (whether we like it or not) of creating alternative, sustainable income while conserving endangered species


A very sad thing indeed but I find it hard to believe ResponsibleTravel.com could see this as a good thing...