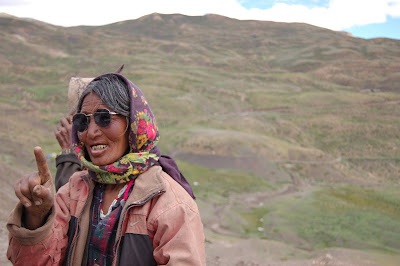 We were on our way after a volley ball game with young lamas of the monastery in the picturesque village of Komic, when we came across some women who came and blocked our way. Women in Spiti Valley are quite social, looks confident and since we have heard several stories about their empowerment we were more than curious to know why they would want to block our way. 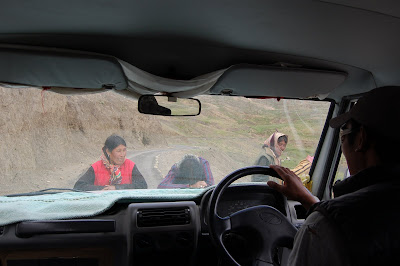 These women refused to let our driver go. They even sat on the bonnet for a while!

We were driving from Kaza to Komic and back en-route to Langza. The Komic at an altitude above 4000 MSL is amongst one of the high altitude villages in the Himalayas.

Initially we couldn't figure out what was happening. All we could notice was that the women, especially the older ones were quite happy about blocking the road and talking to our young driver. There was also a young girl who was shying away when we looked at her, but 'making strong' statements to the driver. 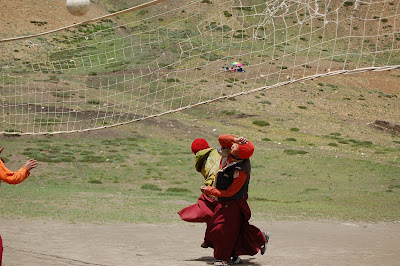 volley ball with lamas in one of the highest villages in the world.

Even after ten minutes, when we realised that they had no intention to let us pass by, we got curious and asked our driver if every thing was okay! He blushed! Once again we weren't sure if we read the expression on his face correctly. By this time two women were already sitting on the bonnet while other engaged in conversation with the boy. It looked more like a cajoling towards the end, but we were totally lost on what exactly was going around.

After half an hour, our driver tried to move the vehicle slightly which was vehemently opposed by the group. They refused to let us go! Later in the afternoon when we managed to pass them, our driver told us that the women were trying to convince him to get married to a girl in their village! No wonder he was blushing. Apparently a proposal had come to him couple of months ago and he was not ready to get married at 23, and the women refuse to accept that. So every time his vehicle passes through the village with travellers, he is under siege! Poor thing.