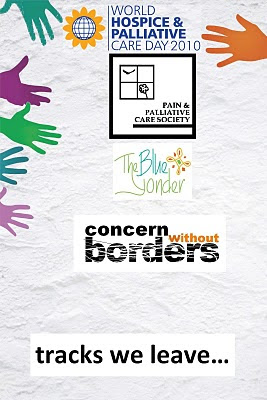 Today is the World Hospice and Palliative Care day. 9th October 2010 is a unified day of action to celebrate and support hospice and palliative care around the world. The theme for World Day 2010, is "Sharing the care".

This Day is for people to engage in events and activities to raise awareness and funds to support the development of hospice and palliative care. All around the world, there are people who need palliative care who cannot access it.

So what is a tour operator talking all palliative care?

The Blue Yonder has seen from close circle the impacts of community oriented, locally owned health care creating magic in the state of Kerala. Most of us are still actively working as volunteers in various capacities. We have seen a small 'pain clinic' growing into a movement. In last fifteen years, the four volunteers have grown into a massive 30,000 volunteers who are part of the 'neighbourhood network. Their ambitious work has created such a positive impact that they are presently catering to two-thirds of palliative care in India!

Pain and Palliative Care Society that triggered all this fifteen years ago is now focusing on strengthening its grassroots base and nurture the younger generation to be responsible to take up more challenges. As of now the movement has volunteers from campus, police stations, medical schools, tuk-tuk drivers. Especially the student-wing of volunteers have been coming up with unique ideas for campaigns and caring. 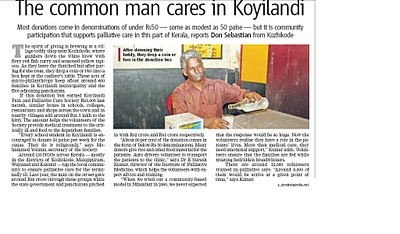 One of the most successful element of palliative care movement was its unique fund raising. Even in the initial stages, PPCS, wasn't focusing on large grants or external funding, but on raising funds locally. From friends and well-wishers it has grown to a mass movement of giving. Now you see volunteers like Gopalakrishnan who go out once in a week to raise funds for the volunteers in his free time. DNA India on 27 Dec 2009 carried a featured about a village in Koilandy where the micro-philanthropy kept afloat around six hundred families. Donations were given by even people going to local bars and toddy shops.

To continue the momentum of building up networks for palliative care and continue giving care for those individuals and families who need a quality of life, Pain and Palliative Care Society has designed an initiative called 'Tracks We Leave...' The famous North American proverb says that we are known forever by the tracks we leave.

Those who enroll to support 'Tracks We Leave...', commit to contribute 1000 rupee an year and enrol others who are willing to join. First contribution happens on the 9th October 2010, as part of the World hospice and Palliative care day celebrations. The Blue Yonder is partnering in the initiative in Kozhikode today by contributing a matching donation of Rs1,000 by all its employees. We are small team of seven, so we will be raising 14,000 Rs annually for the Pain and Palliative Care Society. A small gesture, but we are sure such small donations can one day grow into bigger funds with which we can provide quality of life to the needy.

We urge our friends, colleagues and partners in business to join us and support this cause. For more details on contribution, please write to our colleagues at Concern Without Borders.
Posted by GP at 04:20