Revisiting in search of music... 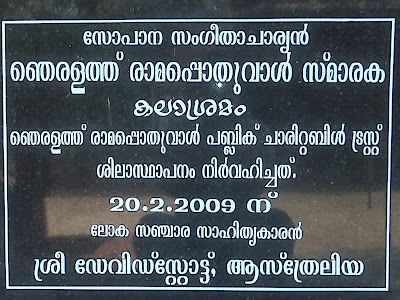 Picture:A plaque announcing the inauguration of the foundation laying ceremony by David Stott from Australia.

David is a frequent visitor to India. It's a country that he calls home. Two years ago, David had to 'agree' to 'lay the foundation' of an innovative experiment in Kerala. He inaugurated the construction of the campus dedicated to the memory of legendary musician and spiritual nomad, 'Njaralathu Rama Poduval' who is credited for bringing out the temple related devotional singing style of 'Sopana Sangeetham' out to the public.

When The Blue Yonder designed a musical trail with young musical prodigy Harigovindan, the idea was to give voice to many unconventional musicians of lower strata of the society along river Nila. This half a day experience became an instant hit among travellers from around the world. Conde Nast traveler called our trip one of the '8 Great Trips' that give back to destination based on the content of this experience. As Harigovindan, who took up the role as a key interpreter says, "This initiative gave self-respect to our musicians in the region. It was a wonderful experience to have music-loving travellers coming to enjoy the unique music style of River Nila and its people'. 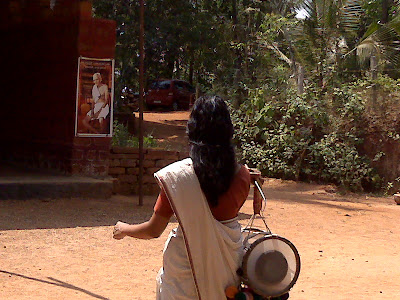 Harigovindan was 17 years old when his father, Njeralathu Rama Poduval died. Hari used to accompany his father occasionally during his travels and performances at various temples and public arenas in Kerala. Troubled that the “Idakka” that was his father’s life, lying unused after his death, Hari taught himself how to play the instrument to keep the memory of his father alive.

Soon he realised that his father's name and devotional songs were fading away from the public memory. He came across many other musicians whose voice were not even recorded in their whole life time. He had the foresight that a generation might live without ever experiencing all those magical voices. He approached the Government and many cultural stalwarts of the state proposing to build musuems and art school to preserve their voices digitally and give recognition to up coming artists. Other than hollow promises and unnecessary controversies, it didn't result in any thing productive. However Hari fought the system, got attention from the public and international travellers like David Stott. 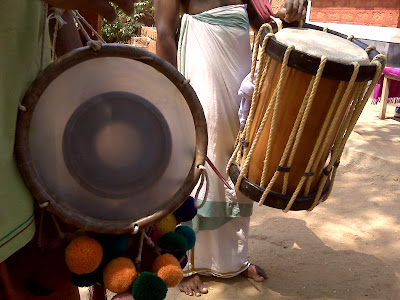 Exactly after two years of laying foundation for the music campus, David Stott along with a group of travellers interested in music and yoga came back to River Nila to see the developments in the location. Seeing a fully functional music school and museum with an open air auditorium and audio library, all David could say was "WOW"! This is solely an achievement of Harigovindan though he humbly acknowledges the generous support he received from ordinary public and travelling community for providing inspiration and energy to go after his dream.

"I didn't set this up because I wanted to do something selfish related to my father. I wanted to do something like this precisely for the reason that many such artists memories were fading away from our memories. For those people who spent their whole life dedicated to music and enriching our traditions, this is the cruelest thing to happen. Representing this generation, people like us have a responsibility to respond to our surrounding. This was mine and I am glad I didn't give up' Hari says. 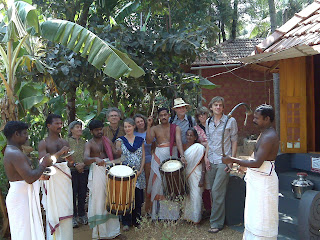 Picture above:
David Stott and a group of music loving Australian travellers in front of the newly constructed temple dedicated to music. Instead of a conventional idol of God or Goddesses, the temple has the 'Idakka' which was favourite musical instrument of Njaralathu Rama Poduval. What better way to pay respect to a man who spent his life dedicated to music, especially devotional songs? The woman standing (3from R) is Kalyanikutti Amma who donated the land to build the campus including her own house to make dreams come true!