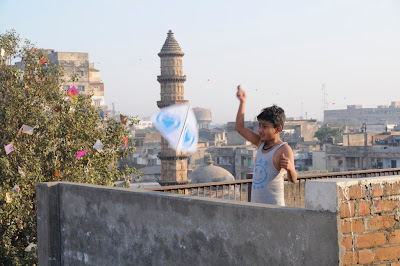 I spied him through a corner of my camera lens, a bundle of nervous enthusiasm. He was clutching at the crisp white kites being handed over to him. He was off in a flash, tightly gripping the kites and the spindle of cord. I ran after him and caught up to ask, “Can I fly kites with you?” There was a shy nod and a gesture to follow him.

We dashed through the warren of dark and narrow alleys of Ahmedabad's old walled city. We traipsed over mounds of fresh dung, deposited by the old city's most numerous denizens – cattle. Very soon I was deep in the belly of another world. He gestured me to follow him into a barely perceptible doorway, while informing someone of a visitor at the same time. I had to keep watch to avoid slamming my forehead into the low-slung door frame, while my little new-found friend was already slithering up makeshift wooden ladder-staircases that connected the different vertical levels of this tiny household. He yelled a “hello” to his mother and summed up my visit in a breath, all the while climbing. In a few seconds we were in fresh air, looking out over the roofs of old Ahmedabad, in time to fly kites to celebrate Uttarayan.

The roof was host to a gaggle of kids and was alive with preparations to launch the first kites, and my friend was completely absorbed. It took only a few more minutes for the first kites to lift away against the backdrop of Ahmedabad's heritage monuments, and on cue, rooftop DJs who had dragged massive audio gear to the roofs got the mood going. Predictably, bowing to popular demand, this was a 'Kolaveri'-themed event, and humming away my little friend got to grips with his kite. Amidst yells from his mother to be careful on the roof, he tried to get his kite aloft.

But alas, his efforts only managed to break the kite's spine. The smile was gone and the enthusiasm went flat as he watched his peers regale themselves in grand aerial battles fought with 'enemy' kites flown from other other rooftops. An uncle quickly rigged up another kite for him, while his cousin got it aloft, but it clearly wasn't enough. My friend dashed downstairs. While I was pondering the consequences of this crushing childhood disappointment, I was served warm tea and breakfast including the Uttarayan kichchdi by the mother who assured me the boy would be back soon. And on cue he was back, fresh from a bath, dressed in his Sunday best, and his mojo – his favorite hat.

The smile was radiant on his face as he ditched his white kites for a sleek back one. He was onto to something, he had figured out how to get a kite aloft. It was now time for me to fade away, as I watched him get his kite in the air humming: “ooh lala, ooh lala, tu hi meri fantasy!”