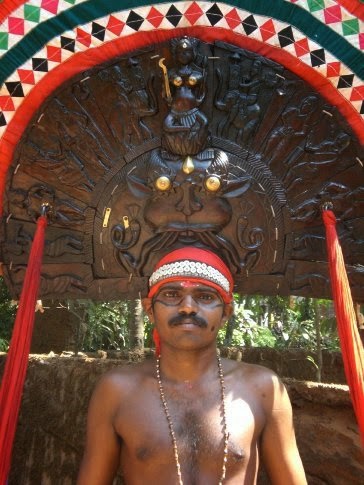 The workmen walk along the road dressed in crisp blue shirts tucked into colourful lungis.  I love the fact that here you see men proudly wearing sarongs of dazzling floral displays of fuchsia-pinks, aqua-blue and lemon.   You never know what you’re going to see next while driving down the street here.
Elephants plod down the street led by their mahoots, tiny temples spew out ear-piercing tinny music from massive speakers, crumbling red-tiled bungalows slump in half-decay at the roadside.  It’s impossible to be bored by Kerala’s daily road-side entertainment.

We stop to watch a road-side festival procession for Vela: all clashing cymbals and banging drums provided by a tiny but enthusiastic orchestra.  A massive gaudy effigy sits beside the players waiting to be heaved upward onto the shoulders of an army of devotees to the nearest temple.

A rickshaw passes by with a sparkling tinsel creation mushrooming out of its roof.  It looks like a Dr Who dalek who decided to dress up for the night.  Then it’s an entire invasion of daleks as a whole platoon of rickshaws bearing this weird cargo begin to whizz by, another then another, turning the rural roads into a surreal sci-fi tribute show.

Driving along in the evening I come across a more modern distraction.  A van we are stuck behind has converted its rear into a TV screen which plays a flickering succession of glossy, gauche advertisements.   All the cars behind putter along at a snail’s pace to bathe in the shimmering glow of the mobile TV.

Just when you think there are enough diversions on the roads here, they go and create one more.
Note: A blast from the past. This article was written by Jessica Lee after winning a travel assignment organised in partnership with World Nomads, Footprint Handbook to India and The Blue Yonder.