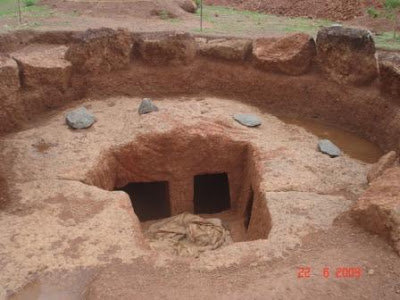 Anakkara along River Nila is becoming a site of great importance because of many recent findings. So this morning we decided to go and find more details that that is available online. Idea was to meet the local Panchayat president, meet the owner of the place ( the land belongs to a private school that is constructing massive buildings in the vicinity). With such an important finding, we were expecting proper protection for the area, ensuring that no further damage is done to the location. Instead all we could see was a thin coir rope tied around a radius of about 5 metres. That's it! The following pictures were taken today and the text in quote is from two articles that came out in The Hindu 10 / June / 2009 and 21 / May / 2008

"The archaeological excavation at Anakkara in the district gave evidences of first excavated Iron Age habitation-cum-burial site in Kerala. Carbon dating of charcoal fragments and physical anthropological studies of bones would give more information on the chronology and life pattern of people lived in this area."

"Archaeologists have discovered a pre-historic necropolis (cemetery) with megalithic cairn circles dating back 2,500 years, many post holes that probably point to the ancient practice of excarnation, a 'wood-henge'-like ritual monument and a site of primitive astronomical intelligence at Anakkara, near Kuttippuram in Malappuram district." 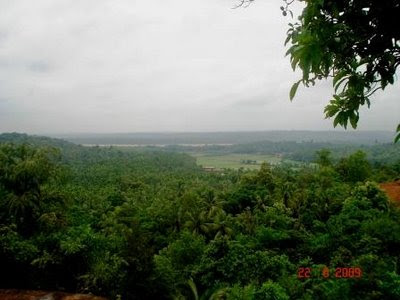 River Nila flows in the background of the escavated site.

"Excavations at the site, a laterite plateau atop one of several primary hills overlooking the Ponnani river at Valayangad in Anakkara grama panchayat, have revealed three chamber tombs containing burnished black and red ware, black bowls and some iron objects commonly seen among megalithic grave goods. Archaic features of the burial type and the conspicuous absence of non-local artefacts among the interred objects suggest that the find is around 2,500 years old. Valayangad literally means the burial place with cairn (stone) circles, derived from the ancient necropolis of cairns. " 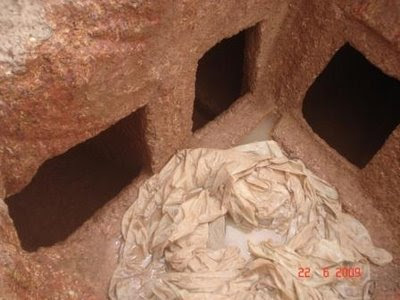 The three burial rooms refered in the press reports

"Interior of the stone circle is divided into three chambers using granite boulders. In this, two chambers were excavated and in each chamber large burial urns with burial goods like iron implements, bone and pots were noticed. Special features of the burials are the occurrence of a hanging lamp and the burial goods were found kept in the river sand at the bottom of the urn, possibly indicating some sort of rituals associated with riverbanks." 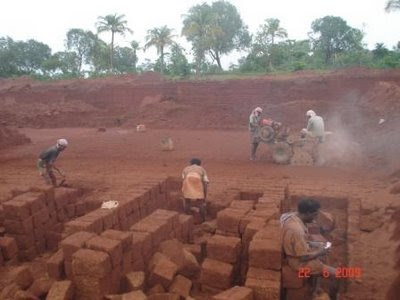 In less than 100 metres away from the 'escavated burial ground, laterite stone cutting is going on un-disturbed. It was in a similar site that workers came across "caves" and gets reported to the Archaeological Survey of India. If this finding was in some other countries, I can't imagine this happening. Reckless Government, reckless people? 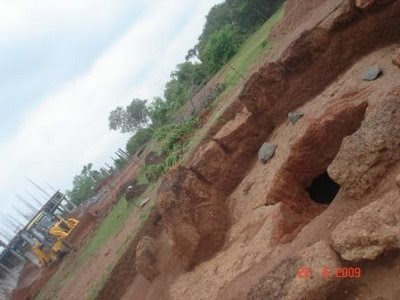 The tiller was working hardly 20 metres away from. Wonder what all they might have crushed away ! Look at the massive construction going on in less than 60-100 metres away from the burial site?
Posted by GP at 20:54