The Good Journey - Perceptions of a traveller

"How can a nice journey become a good journey? This is what gutereise (goodjourney) is all about. Taking India as an example, I want to show how travelling can be an unforgettable adventure for ourselves and actively support the environment and communities at our destination. For this aim I need you: Become part in every step of this project – from the idea to my research trip to India and finally to the book we will put together – and create a new, responsible way of travelling with me!" - Dorit Behrens 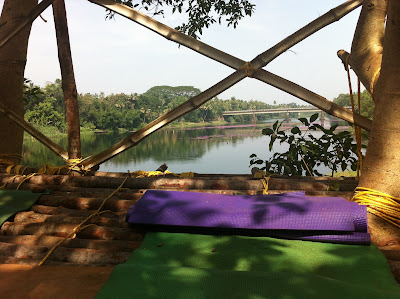 Yoga by The River! A travel experience soon to be launched from TBY.

Power to People:
I’ve just had an “aha-effect”: In preparation of my trip to India, I had learned that the overall aim of responsible tourism is to save the places we love to visit. But that is only one side of the story. For, in addition to the visitors’ perspective who want to maintain the environment and not exploit the people at their holiday destination, there is also the hosts’ point of view. Responsible tourism thus is really about two things: creating awareness in travellers for their responsibility on the way – and empowering local communities to look after their own economical, environmental and cultural well-being. But how can this be done?

Here a number of initiatives come into play that emerge in India right now, mostly on grassroots level. Their aim is to facilitate a lasting positive change long after the single tourist has left. In the southwestern state of Kerala, it seems, these initiatives are especially active. Maybe this is due to the fact that Kerala faces some special issues such as a drastically declining livelihood for traditional professions such as farming or fishing. It might also be a relict of the communist era (Kerala is the first state to have had a democratically elected communist government): Many of the projects are organized in community-owned “co-operatives” - doesn’t that sound slightly socialist? Well, never mind the wording – it works.

Kerala is pretty special: Located on the southwestern Malabar coast and comprising some 39,000 square kilometers, the state features an abundance of geographical and natural varieties: the Western Ghats highlands in the east, followed by midlands with dense vegetations and eventually the lowlands along its beautiful coastal zone with an elaborate network of streams and lakes, the famous Backwaters. The region usually gets an efficient rainfall of some 3,000 mm during the monsoon season (June-August) resulting in a rich biodiversity. A perfect place to grow veggies and livestock – the majority of local communities rely on agriculture – and to stay and spot the different shades of green: All around there is jungles with loads of wild animals (even Elephants!), innumerable lush tea, rice and banana plantations and palm trees all over the place. In fact, the name Kerala means “Land of the Coconut Tree” in the local language Malayalam. 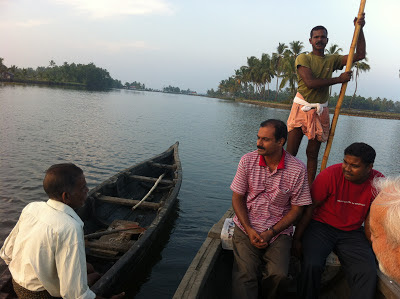 An 'ordinary' meeting like this in the middle of the river for a local person is an 'Extra Ordinary' Travel experience for           a traveler.

Another example of how to empower local communities is The Blue Yonder, one of the first responsible tourism businesses in India founded in 2004. The small team regards tourism a tool for a sustainable regional development and offers tours to create meaningful exchanges between guests and host communities. In Kerala for example, you can meet Varanath Asan, a humble man in his seventies who built a school to pass on the ancient art form of Mudiyettu. The ritual dance drama based on a mythological tale around the goddess Kali and the demon Darika was once performed in temples by his family, but nowadays is threatened with extinction. In his small school, Varanath teaches his wisdom students of all ages, even girls, who were formerly not eligible to learn the craft, and thus manages to keep the cultural heritage alive. Recently this was recognized internationally: UNESCO has declared Mudiyettu an Intangible Heritage of Humanity.

On other tours travellers may test their talents for the traditional craft of handlooming – a symbol of Kerala’s female culture of wearing saris – or learn how one of the oldest crops in the region, the red and very nutritious Pokkali rice, is being cultivated in a sustainable symbiosis with prawn farming. Set in the stunning Backwaters, Pokkali is the only variety that tolerates saltwater – and thus is a possible answer to food safety questions in times of global warming and sea-level rise in coastal areas. The communities benefit from these tours on various levels: Through fruitful interaction with incoming travellers, a growing recognition in the world and, very practically, though the support in kind of The Blue Yonder – while the projects always stay in their own hands. Meaningful encounters like these attract more and more travellers: The Blue Yonder now offers tours throughout India, in Nepal, Bhutan, Bangladesh, Sri Lanka and South Africa. 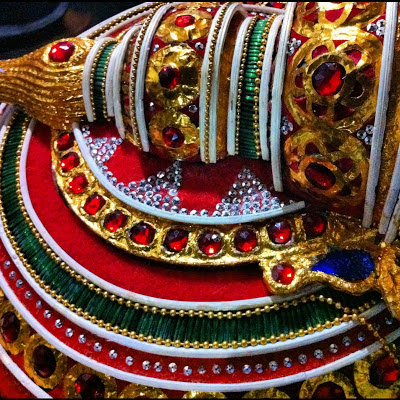 The longer you stay in one place, the deeper will be your understanding of it. Kabani and The Blue Yonder both offer the opportunity to stay a while and get some hands-on experience. While it is possible to support Kabani as a volunteer to facilitate additional income for underprivileged communities, The Blue Yonder provides several Workshops and Art Residencies in their corresponding projects in which candidates can learn a handicraft from scratch and put in their own knowledge. At the moment, the Chennamanagalam Handloom is looking for a textile designer (or student) who is keen to learn the traditional way of weaving and who helps to introduce the use of natural dyes. Interested? Then go to www.kabani.org or www.theblueyonder.com

The above text was edited for brevity. Full text including article on Kabani written by Dorit can be found here.