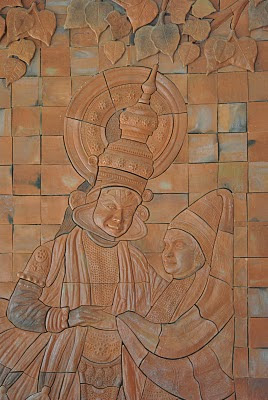 My journey into the world of the rural artisan communities was not with the intention of ‘developing’ them or educating them. I went to them to regain that which I had lost in the process of getting educated; to learn from them. Having escaped ‘education’ and ‘development’ they were still original and authentic and were holding on to the culture and world-view, which sustained them for centuries. I perceived the rural / tribal communities as being wise and evolved; and recognised that only by learning from them could we lead sustainable lives.”

A news report on how the destiny of Aruvacode, from being a simple potter village had changed to becoming a hub of sex-workers impelled him to proceed to Aruvacode, a sleepy village by the river in Nilambur in Kerala. According to Jinan, “the reason for such a drastic transformation in the village was the rush of cheap substitutes of steel, aluminum, and plastic products to pottery in the market. The rush had pushed the demand for earthenware off the edge and the artisans were left a troubled and distressed lot. Seized of their traditional labour, women of the village were forced into sex-work.

Advent of consumerism had held out its stakes and the artisans failed to keep pace with the fancy needs of the new consumer. In earlier times the artisans had always responded excellently to the local needs of the people, as a strong cultural bond held the user and the producer in unison. But every nuance of modernity brought with it newer difficulties for the potters.” 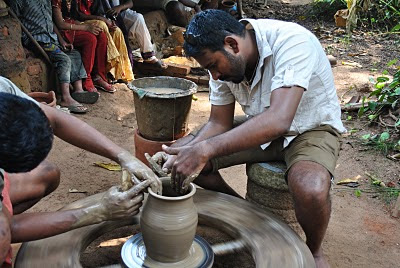 Pottery revival is to some extend happening through tourism in other villages like Arangottukkara as well. pic by Anita Nair

Several years with the potters of Aruvacode had revealed to him that the issue of development lies deep in preserving the self-respect and creativity of the concerned community. In his presentation on “De-colonising the Aesthetic Sense: The story of craft revival in Aruvacode potters’ village” Jinan argues that “any community, armed with an absolute sense of self-respect and untarnished creativity, is well able to sail through all their problems. It is a dilemma of the ‘educated’ and the culturally uprooted sections of our society where development is perceived more on an economic plane. It is these sections more than any body that genuinely consider the distressed community as incapable of confronting and solving their own problems. “

Treading therefore very carefully, not to step on to the much-travelled path by the interventionist agencies, he took up the work with the potters, honouring his own integrity. He ensured that the aesthetic quality of whatever they made to be rooted in their own culture. He therefore limited his role to incorporating utilitarian aspects into their creations. It was a slow process and the products that emerged were evolved at a natural pace.

The basic idea behind their training programmes were to help the individuals regain their wisdom and confidence which lies embedded within their own communities and culture, believing that creativity can and does solve many a problem related to self-esteem. 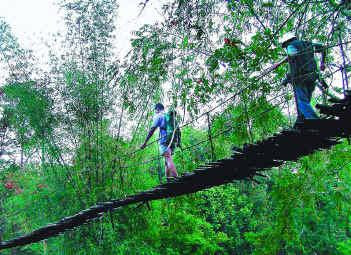 Trekking through the rain forests to reach to Nilambur from Wayanad. Pic. Anand Sankar

Five years ago, after a long and two-days of ardent trek from Waynad through the rain forests to Nilambur, we went to spent some time with Jinan. He was by then married to a local woman and still staying with the community creating more livelihood for them. Jina’s work has created good demand for the unique products developed at Aruvakode and one can see products from this small ‘colony’ being displayed in several cities in India.

Our Norwegian partner Ethical Travel Portal had put together an itinerary that featured interactions with artists at Aruvakode. Sometimes, all it takes for a change is one person. In this case it was Jinan. One of our local heroes.
Posted by GP at 22:21